Wednesday 1 October 2008 was Lincolnshire Day and was celebrated in the Eastern Branch with a quarter peal of Grandsire Doubles at Butterwick conducted by John Collett.

Before leaving for a holiday in the USA Phil Mason had arranged a very ambitious celebration of quarter peals with Lincolnshire as their theme. Most of the 16 ringers were from the Central Branch with very welcome support from the West Lindsey and Southern Branches of the LDG. Phil Wild from Nottingham joined us in the evening. 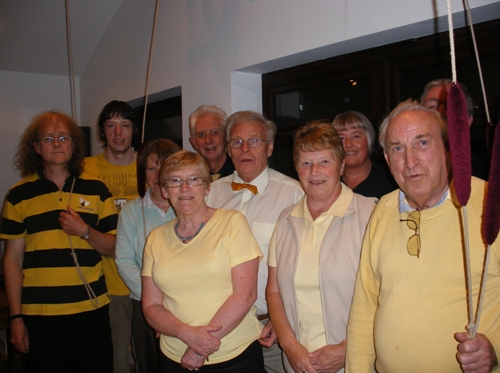 The day didn't finish at that - a move was made for yet more ringing on Sandra's 'pots in Lincoln. Very late in the evening yet another quarter of Lincolnshire Major was successful.

A very long and tiring day but very enjoyable and "Lovely Lincolnshire" was well and duly celebrated.

Please put 1 October 2009 in your diary and lets hope all six branches of the LDG celebrate next year.

Soon after the successful launch of the Lincolnshire Flag [above] I was contacted concerning my views on a date for a Lincolnshire Day. I said that I considered the Lincolnshire Rising of 1536 the most significant event in Lincolnshire’s history and that either 1 or 2 October would be appropriate dates. 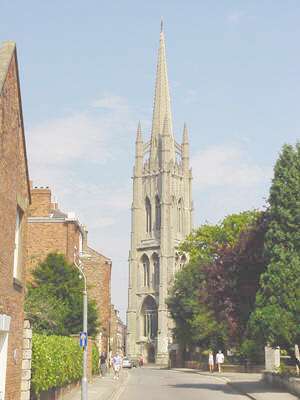 Briefly the reasoning behind this was that on Sunday 1 October 1536 the vicar of St James church Louth [right] preached a sermon in which he referred to the closure of the smaller religious houses and rumours that all churches less that seven miles apart were to be closed and their valuables, including bells, sold to provide funds for the Kings Treasury. Clocks were rare and church bells were used for a variety of purposes and on 2 October 1536 one of the bells of St James church was tolled to call the people together. It was decided to march to Lincoln as a protest. Eventually 40,000 men camped around the Cathedral and a petition was despatched to the King.

Henry was obviously very concerned and in reply to the rebels demands he referred to them as ‘the rude commons of one shire, and that one of the most brute and beestlie of the whole realm....’ He ruthlessly ordered the rebels home and the rising was suppressed but Lincolnshire’s independence was established.